Now accepting applications for Room and Board and Scholarships for Academic Year 2021-22.

Alumni of this time saw everything from the launch of Apollo 13 to the fall of the Berlin Wall. I-House was there for it all.

I showed a non-political presentation about Jerusalem's holy sites with the three monolithic religious sites of Christianity, Islam and Judaism. Some students were outraged and I received threats. I was relieved that I had the support of the I-House Director then Mr. Sheridan Warrick. 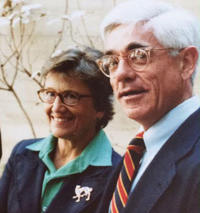 Every evening after coming home from I-House, Betsey would cook dinner for Sherry. While she moved about the kitchen preparing the meal, Sherry sat in his favorite kitchen chair and told her about his day. Whether there was good news to share, or an impossible task to tackle, Betsey listened, allowing him to share the burden of his responsibilities. He led I-House during pivotal moments in American history, as his tenure included the Free Speech Movement and the Vietnam War. Through this nightly ritual, Sherry was able to re-energize and attack the next day’s challenges anew.

“I-House got a two-for-one deal,” says Susan Klee, Administrative Assistant to Sherry. “The organization benefitted in a myriad of ways from the commitment both of them felt to the institution.”

The 26 years Team Warrick spent at I-House forever impacted Sherry and Betsey, as well as all who lived at I-House during that time. Theirs is a story of steadfast commitment and inspiring passion not only to I-House and its mission, but also to each other. 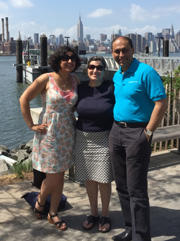 We, Soumitra Dutta, an Indian national and Lourdes Casanova, a Spanish national, met at the I-House during our stay in the fall of 1985. 30 years later and after having worked at the INSEAD business school in France for 23 years, we are back in the US. Soumitra is Dean of the Johnson School of Management at Cornell University and Lourdes is Senior Lecturer and Academic Director of the Emerging Markets Institute at the same school. Our 27 year old daughter Sara is working now in Washington after her phD at the University of Oxford. We are very grateful to the I-House for making us feeling at home when we first came to the US and making it possible for us to meet and start a family and a journey together.

Sepia Memories
I-House came as a breath of fresh air – a bunch of intelligent, erudite, cultured, and some highly talented and interesting individuals, thrown together. Supper hours from 5:30 pm to 7:00 pm were at first unusual, but I quickly adjusted. The well-topped up bowl of multiple flavors of all-you-can-eat ice cream became something I looked forward to. My south Indian vegetarian colleagues, though, had a somewhat more difficult time with the predominantly non-vegetarian cuisine, as I would sympathetically observe them add something ad hoc to a bowl of white rice and stick the concoction into the microwave.

Coffee Hour on Wednesday nights at 10 pm in the front hall, with plenty cookies as well, was a welcome break, especially during winter. Discussing various aspects of economics and law with my Dutch friend Sjef van Erp made the hour vanish in twenty minutes, and I’d wistfully return to homework. I’ve been lucky enough to renew this pleasure on several occasions, most recently when I visited Maastricht a few years back where Sjef is professor of law.

My favorite, though, was the social dance class on Monday nights, where lessons on Fox Trot and Swing would be on offer. My Kiwi friend Darryl Biggar and I would make our way to the large ballroom, where the girls would all stand against the wall on one side and the guys would stand against the wall on the opposite side. At the instructress’ signal, we were supposed to pair up, and then follow the steps she demonstrated. It didn’t quite happen that way, however. At her signal, the guys would rush across the room, the girls would coolly stay put arms crossed. The shy fellows like Darryl and I would be left out of the first dance! After one or two dances we’d muster enough courage to tap some guy on the shoulder, and move in. It was worth it – to get to hold someone special.

Short after-supper walks with my gorgeous Scottish friend Fiona Lindsay Macbeth, interactions with the sensitive Chris Perleberg from California about all manner of things, conversations and a ride around the Bay Area with good-natured Torfinn Horte from Norway, are the small things that are still imprinted in my memory. Supper table talk would inevitably veer around to various issues in our respective countries, and I remember discussions about the Berlin Wall. Ulrike Werner-Zwanziger from Münster, and my other German friends would vehemently deny any possibility of the wall coming down, but less than a year later, in November 1989, it actually did!

All Nations Night marked the end of it all, in a manner of speaking. This was held in the ballroom, towards the end of the academic year 1987-88, where students from different parts of the world presented items. All were brilliant, but one that particularly caught my fancy was a sensual belly dance by someone and her little group of musicians from countries in West Asia. Even though I moved out of I-House after the first year of my doctorate, I remained in touch, and briefly returned there as recently as 2007, in connection with a couple of Economics conferences at UC Berkeley.

Sepia memories from those years do flow, that I can share but yet not show.

When I came to I-House, I found the dinner timings really strange (5:30 pm to 7 pm) because at home I always had dinner after 8:30 pm. So I would come in as late as possible. But then the sole vegetarian entre would often be over. So I often ended up eating bread, jam and juice for dinner. But there also was ice-cream: 6 flavors and unlimited quantities. Not surprisingly, I put on 16 pounds in 6 weeks! Then I had to put a stop to this silly diet, and luckily, intra-mural sports started just then. So I ended up in a volleyball team with a guy of Armenian descent and another who was Uruguayan! That was the beauty of I-House, food funnies notwithstanding!

I came to I-House as a foreign student from India. I remember my stay as most enjoyable experience in my life. I made new friends with whom I used to go see movies and dance at the I-House dance class. I also had a chance to become Coffee Hour host for one quarter. I used to make coffee and bring it with cookies every Wednesday at Coffee Hour. 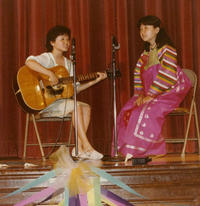 The UC Berkeley’s International House provided me a stage that I could have the first performance of my song ‘Ga-si-ri’ for Korean Cultural Festival in 1983. On the festival’s evening, two female Korean Cal students sang the song in front of about 300 Korean Cal alumni and their friends. The performance has encouraged me to compose more songs. Although I am a computer scientist, I made my own music CD and had a few musical performances in Seoul, Korea. Not only I have enjoyed my life much while I sing my song playing guitar or piano but also I have influenced people with my lyrics that delivers my message to the public. I wish that many Cal students enjoy what they love to do and have an opportunity to show their performance to others at the UC Berkeley Campus.

Good luck on your celebrating 85 years of I-House! 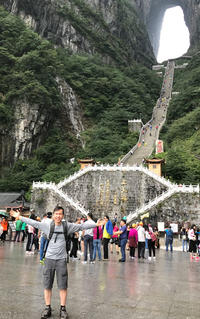 Originally, I had a negative experience at Berkeley.  Since I was from San Francisco, I was on the lowest totem pole for need, and was denied housing.  I therefore was required to commute by BART the entire year.  Since I did not live on campus, I really didn’t have a social component.  Even with my major of BioChem, I did not feel connected to other students.  Then, I discovered I-House and was able to live there during my senior year. I had a wonderful time at I-House and I made many long lasting friendships—I have be friends with some for over 30 years.  I truly felt a sense of community and a true sense of life.

My time at I-House was truly a positive time for me. I-House had the best food options; even for plant-based eaters. And there was an openness at I-House with a sense of acceptance and everyone truly embraced the tenets of the I-House mission. Everyone at I-House was very smart and very personable. I loved the front desk staff and events in the Great Hall. I remember we would hang out a lot and then take a study break to actually study. We also enjoyed hanging out at the I-House Cafe and playing many rounds of ping pong.

In early August 2017, more than 40 alumni from 1987 – 1992 returned to I-House for a reunion. Quoting Steve Rogers, “When we all arrived and greeted everyone in the lobby, it felt like not a single day had passed.  We all had the same chemistry with each other. This special bond of I-House transcends time.”

We had such a great time that we are thinking of having another reunion in three to five years. For the next reunion I would like to do more research and invite more people to attend.

Make a Gift to International House