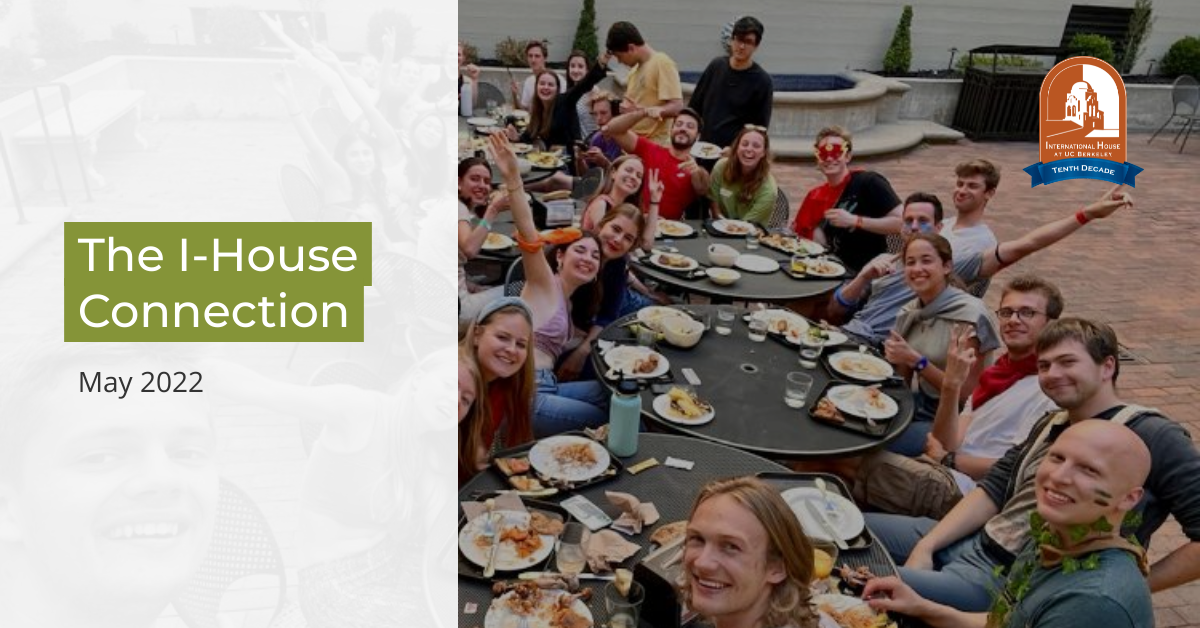 This week is bittersweet at I-House. Commencement ceremonies and I-House grads in full cap and gown glory flowing through the hallways mark the joy of the end of the academic year. Hugs, wistful smiles, group photos, and not a few tears for those departing add to the tableau.  Yet training for Summer Session and Fall Resident Assistants are already underway, and a full set of welcome activities are about to begin for new and returning residents.

In this issue of the I-House Connection, please join me in congratulating the eleven 2022-23 Gateway Fellows!  This flagship program helps to attract the best and the brightest to UC Berkeley and to I-House.

I hope that you will be inspired as I am by the inspirational story of I-House resident Molly Nantango, and her Ntongo Skills4Peace project supported by a grant from the Davis Projects for Peace program. Please also join me in congratulating recent I-House alum Alex Mombanta for receiving the Chancellor’s Award in recognition of his work in racial justice.

If you haven’t yet had a chance to come by our recently reopened edmonds Café, please visit us next time you are on campus, please note our new hours.

Finally, I hope that you enjoy a farewell blog post by Jeanne Bloch, one of our fantastic Social Media Ambassadors.  Go Bears!

In collaboration with the UC Berkeley Graduate Division, and through the support of generous donors, International House holds the annual Gateway Fellowships competition for prestigious one-year awards for first-year or continuing graduate students in a Doctoral Program at UC Berkeley. Priority preference is given to new incoming graduate students, and only those with financial needs are eligible. 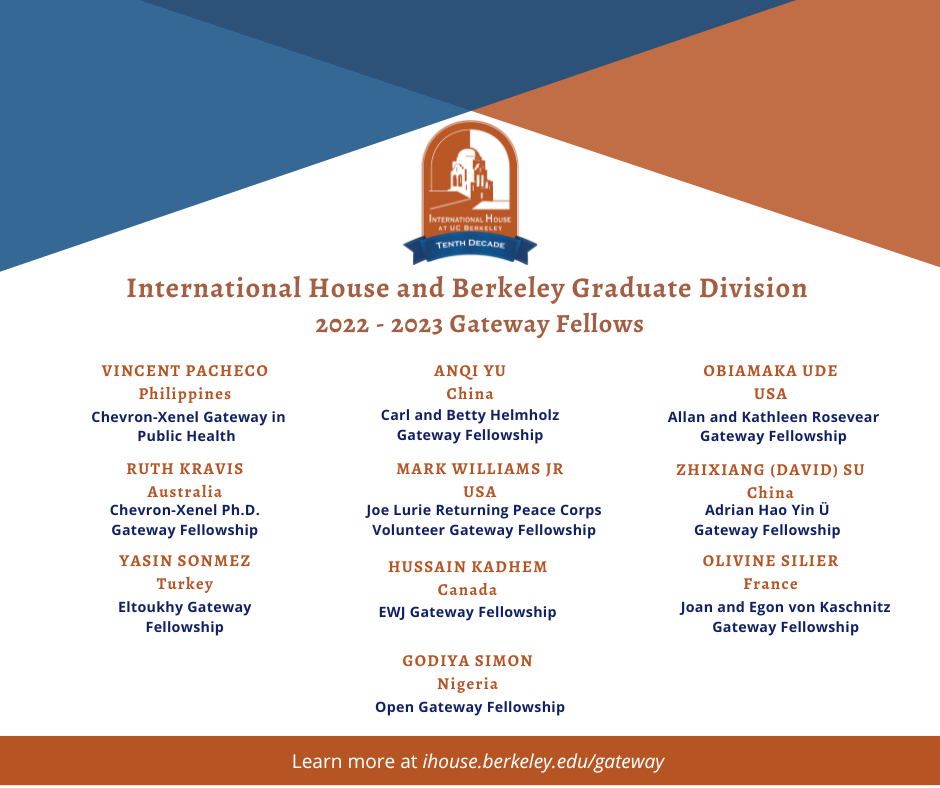 Award recipients receive one academic year of single-occupancy room and board at International House, fees and tuition paid by the student’s academic department, and a $5,000 stipend from the University of California Graduate Division. To be considered for this award, applicants must be admitted to UC Berkeley for the coming academic year, be able to reside in a single-occupancy room at International House, and be nominated by their academic department; or they may apply directly with the support of their department.  The Rafael Rodriguez/Golden Age Fellowship is a similar fellowship for one to two Ph.D. students each year. Nominations are submitted by the student’s department to the Graduate Division. 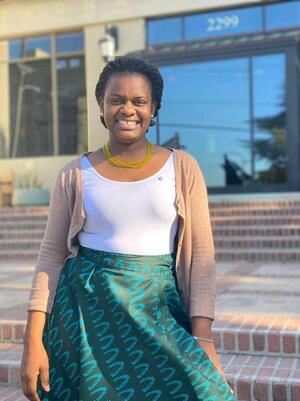 In this 15-week project, the Maendeleo Foundation's Skills Centre will provide vocational skills training in hairdressing, catering, and metal fabrication to unemployed youth impacted by COVID. Nantongo will coordinate mentorship and life skills training, and the youths will also receive digital skills and entrepreneurship skills training. Most of the grant funding will support the purchase of equipment, allowing the foundation to continue providing vocational training to unemployed youths even after the summer program ends.

Ntongo Skills4Peace aims to address high crime rates and unwanted pregnancy rates among youth living in Ntawo village in the Mukono District of Uganda. This issue has been aggravated by the COVID-19 lockdown when youth were out of school.

Nantongo is one of 10 Davis Projects for Peace grant recipients who will carry out projects in eight different countries this summer. In an interview with Jennifer Monahan, Communications Manager for the School of Social Welfare, Molly talks about her previous experience doing social work in Uganda, how the project got started, and her future plans as a Berkeley student.

Alex Mabanta (IH Fall 2019) was honored at the annual Chancellor's Award Ceremony on April 29, 2022, for his multi-year leadership in un-naming four campus buildings named after racist UC Berkeley administrators and professors.
He writes, "Each building is a different department and a different story, but collectively the campaigns push UC Berkeley as a leader within the UC system for racial justice." 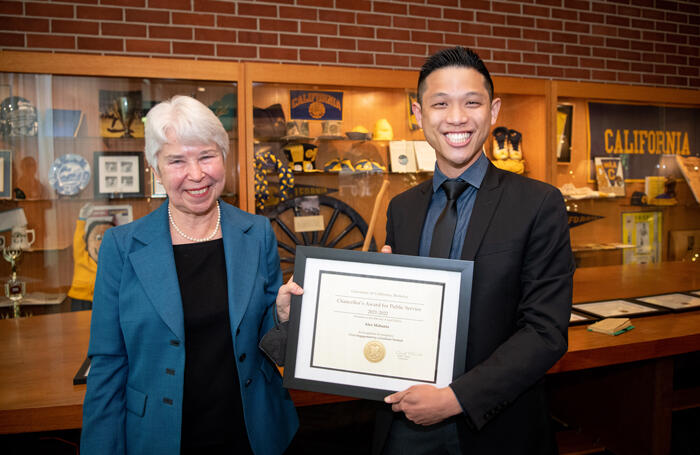 Alex Mabanta is a Ph.D. student in the Jurisprudence and Social Policy program at Berkeley Law. The treatment of immigrants has been an important issue in much of Mabanta's campus-based work, including his recent work on the Chancellor's Building Name Review Committee, in which he has investigated, reviewed, and recommended the un-naming of four campus buildings since 2018: Boalt Hall, LeConte Hall, Barrows Hall, and Kroeber Hall. In each recommendation, Alex has co-authored how UC Berkeley may foster civic education across its landscape of public memory: including the construction of plaques, exhibits, or murals that enrich and recontextualize collective knowledge of buildings and monuments from the perspectives of multiple parties. As a Chancellor's Public Fellow with the American Cultures Engaged Scholars Program, Mabanta has guided students' learning experiences by working with Professor Kathryn Abrams to offer direct services and community-engaged research opportunities for students interested in immigrant rights, undocumented activist-led movements, and state and federal migration policy with community partners and legal aid organizations across Northern California. He also serves on multiple non-profit boards at the campus, county, state, and national levels. "The issue of justice for immigrants has been a natural interest for Mabanta as his family originally migrated from the Philippines," says Professor Abrams, who nominated Mabanta for this award.

We are pleased to share our latest blog post, written in English and French by Jeanne Bloch, one of our amazing Social Media Ambassadors. 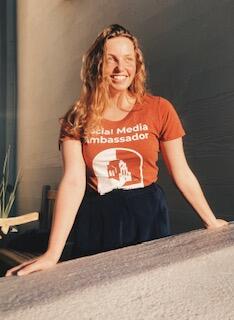 The residents live on eight different floors, in single or double rooms. They share showers and bathrooms. The furnishings are simple, but everyone turns their room into their own, as the photos and memories accumulate over beds, desks and dressers.

International House, thanks to a community-thought design, allows residents to share warm common rooms: the Great Hall with its fireplace, comfy couches and giant TV, the game room, and the library, which is open 24/7 for residents.

The words “May Peace Prevail on Earth” are written at the entrance on peace poles in sixteen languages.

Read more on our blog. 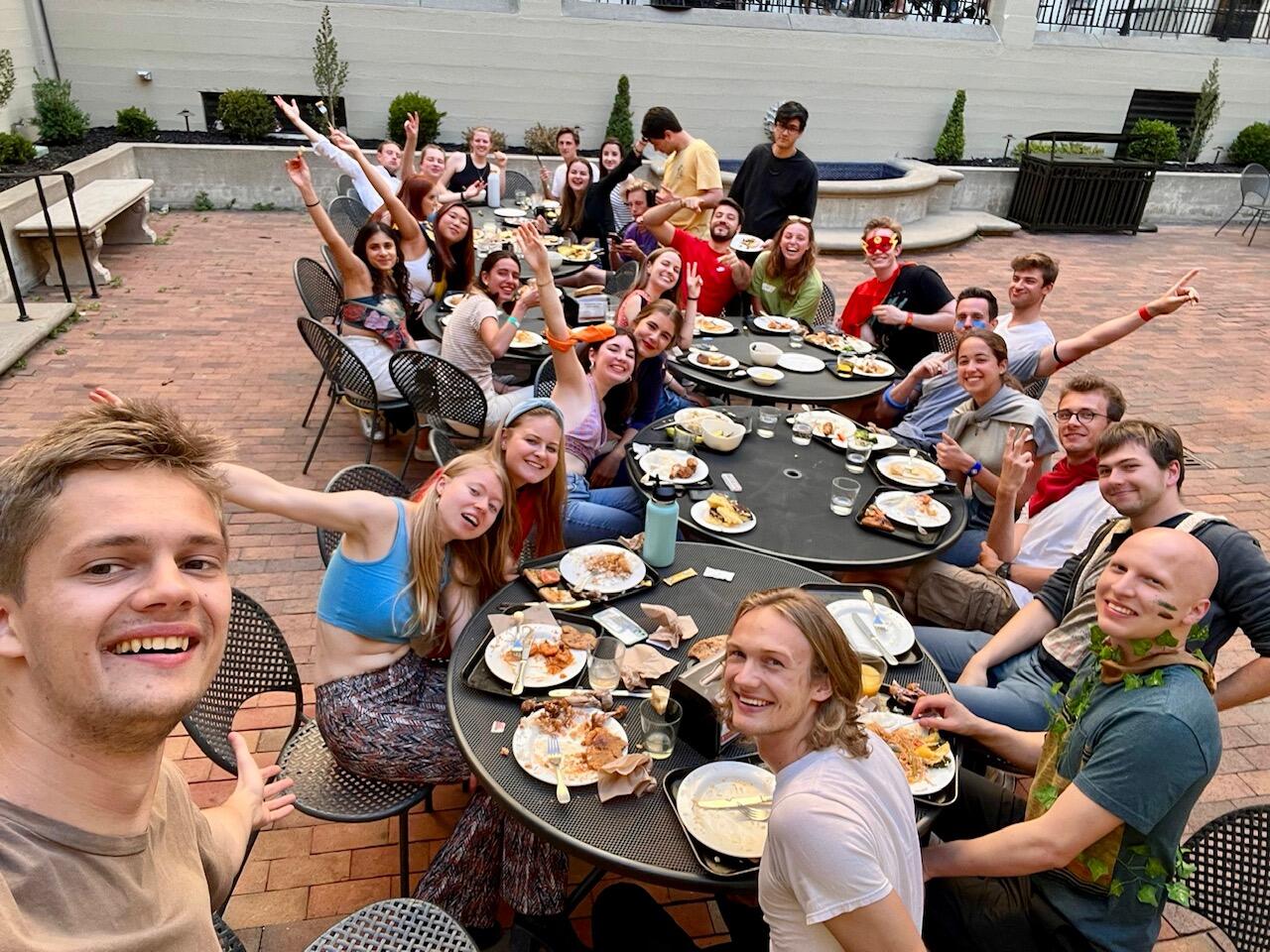 Dinner with friends in the Heller Patio

Celebrate American Craft Beer week at edmonds café!  All beers will be $1 off now through Sunday, May 22. 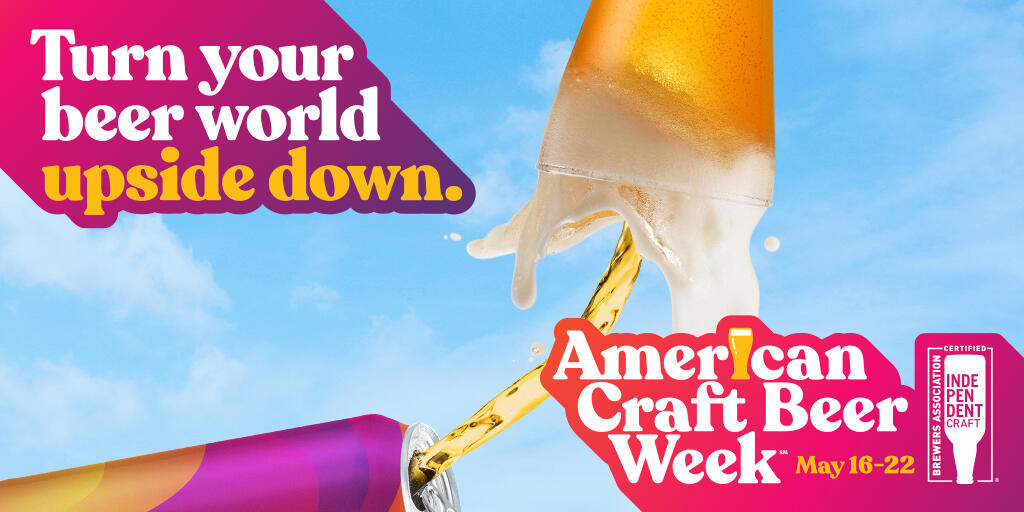 Please make a Gift to I-House 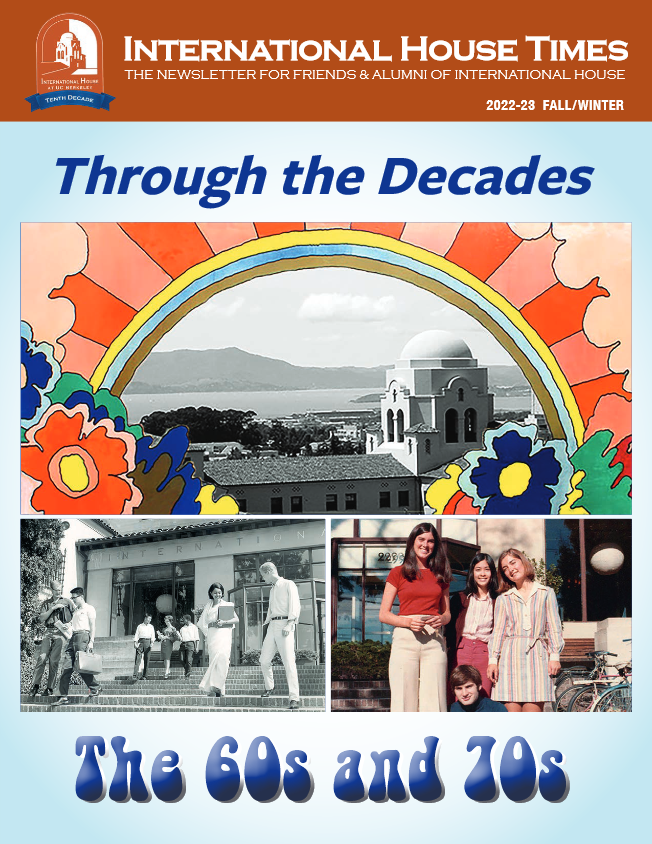 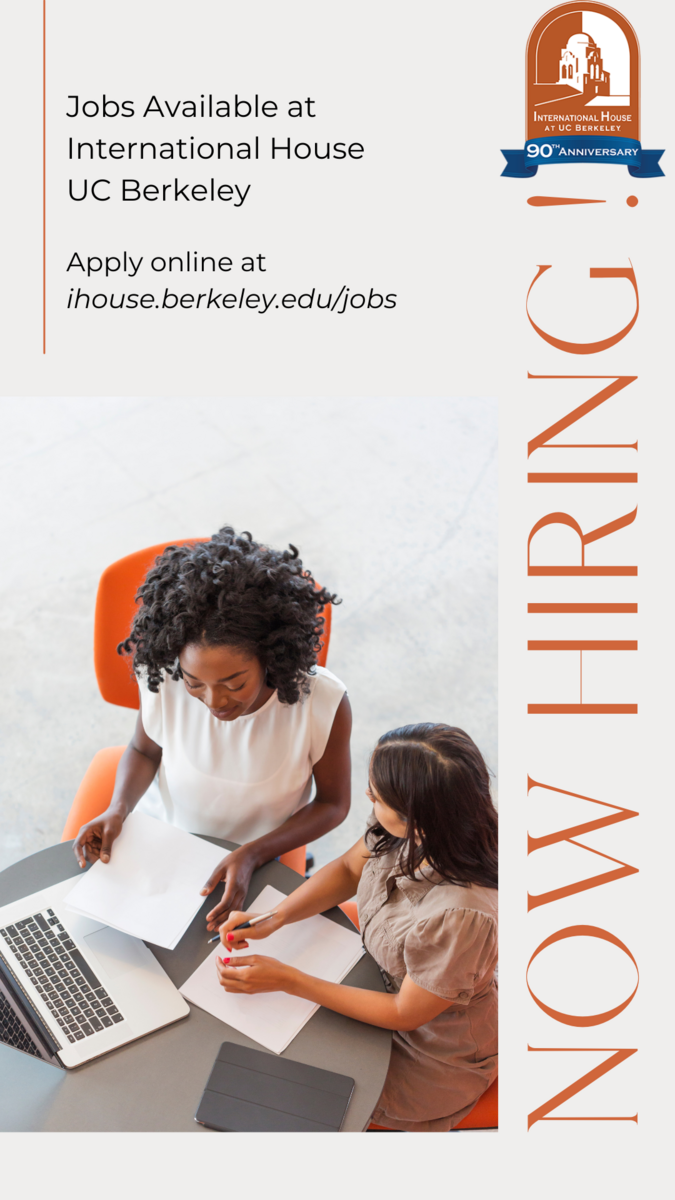 Join our Global Community at ihberkeleyconnect.org.