The first generation to have the Internet still learned more from I-House than any website.

Erin lived in I-House for several years and remembers it fondly. Erin writes,“I opened the first bean to bar chocolate factory in Pike Place Market in Seattle this summer. I founded indi chocolate in 2008 and travels the world and looking for great tasting cacao to make chocolate. If any I-House folks know good cacao farmers please contact indi chocolate and let me know.” 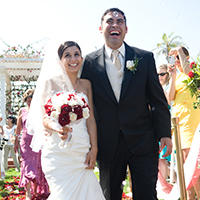 My wife, Sara Bakhtary (Iran/US) and I (Guatemala/US) met at the I-House during the first coffee hour of the semester. I invited her to a trip to Cancun I was organizing with a few friends from I-House but she could not join us. Instead, I had to wait to court her during ping pong games and I-House parties in the Game Room, during the salsa class I used to teach in the auditorium (she was my student and I would make sure to pay extra attention to her among the 120 other students).

Within a month and a half, we started dating. Our first kiss was at the Big C. We would eat all our meals together and with friends, took a spring break trip with 70 other I-house residents, and continued to foster our relationship.

Our most trusted friends are from the i-house and that trip - most of them came to our wedding and we went to theirs!

We got married 4 years later (after 3 years long distance, me in NYC/Berkeley and her at UCSD for Medical School).

We now have a lovely family of four, two young girls (2y - Leila, and 4mo - Aria), we speak Spanish, Farsi to them and hope they're trilingual.

The months leading to my first year at I-House were awful. I had so many problems that I missed out on the orientation camps and other initial activities as I struggled to cope with the fallout from a bad break-up and health concerns. Sometime in early October, I took a seat at a long table across from two unassuming residents seated side by side, not knowing or having met anyone but my withdrawn roommate.

The small talk about our individual travels led me to make the following comment, still unaware of my companions' names or origins, "The most depressing place I've ever been to is Copenhagen in the Summer time." The two young chaps turned to gaze at each other, both reacting with puzzled expressions that could only mean one thing. "No," I yelled, pondering the chances of such an occurrence, "You guys aren't from Copenhagen?" The two young men gently nodded at me confirming my fears. In a rush to diminish any insult, I quickly exclaimed the truth, "I love Copenhagen, it's one of my favorite places!"

For my next three years at I-House, I made sure to keep such jokes out of my conversation with others until we became more familiar with each other, not wanting my dry wit to begin any future friendships off on the wrong foot. In five weeks, we will be gathering for yet another of our regular reunions that have in the past included a Spaniard and German, and that occur on both sides of the Pond since that fateful day nearly sixteen years ago. Whenever we are together, I make sure to introduce them to others as "The friends I made by insulting their country."

She's not bad, actually
We both lived at I-House in the fall of 1997 - Neil as a second year masters student from Ireland and Marloes on a semester's exchange from the Netherlands. We met at a "roving room" party (each floor had a different theme) early in the semester - and I still recall seeing this pretty, strong but yet vulnerable girl. She saw me distributing the drinks at the party and realized I was a good guy to know! Our relationship started at the I-House Halloween party, me as a bloody Caesar and Marloes as Morticia Adams. I did have to look past the outfit that night! We kept our relationship secret, running up and down the stairs at the end of one of the 3rd floor corridors to meet each other - eventually surprising our friends when we told them we had been seeing each other!

Marloes falling for a foreign guy was her mum's worst nightmare - so I had some significant impressions to make on her family :) Despite only having a short time together in Berkeley, we kept it going long distance for a couple of years - eventually settling together in London in 2000. The long distance was not easy at all, but when you have found the "one" you want to spend your life with you do go through a lot to make sure it can work. Now happily married with 2 lovely kids in the Netherlands (women tend to win these things!). Marloes still remembers talking to another Irish guy who convinced her that I was serious about her after I had told her she was "not bad, actually" - a typical Irish understatement that she was not too impressed with! One of many cross cultural alignments we've had to work through during our nearly 20 years together...

(Featured in I-House Video: If These Old Walls Could Speak )

(Featured in I-House Video: If These Old Walls Could Speak )

I remember when I had no way to get from my wheelchair to my bed and I remember that I felt so stuck and alone but I could knock on Milos’ door and he would be like, “Alright! Let’s get you into bed.” It became almost a regular routine that in the middle of the night, I would wake Milos up and so without even opening his eyes, in his pajamas he would just go across the hall and turn me around and go back. And it’s that kind of friendship that makes you realize that you can do anything if you have a good person who’s watching your back. And people like Milos and other people at I-House actually show me that I have so much to share with the world.

I first came to know about Berkeley growing up as my mother had a PhD from its Chemistry Department. I have a few other relatives who've been through Berkeley. To a man, all have had positive things to say about the environment, the school, and the academics. At age 16, a physics instructor at school suggested I apply to a summer research program at the Livermore Lab. I ran this by both my parents. After much haggling and bargaining, I arrived at San Francisco Airport in June of 1998. Upon walking into the International House, I realized this is one special place unlike any other.

Even when France beat Brazil in the finals of the 1998 World Cup, there was no fighting in the Great Hall. Having grown up in England, where punters have replaced religion with soccer, this was a bit of a (pleasant) surprise.

I found that I-House was a place where I could let my guard down and not have any worry about suffering any criticism based on who I am, where I'm from, or what I've been through. In short, I-House helped me become comfortable in my own skin. I am not exaggerating when I say that the experience of staying at I-house will lead to replacing the sectarianism that is tearing our world apart with a respect for intellect and what every single one of us brings to the table.

My time in Berkeley, and especially at I-House, has totally transformed my life and the way I see the world. I arrived at I-House not knowing anyone. It was a strange feeling at first. This huge cozy house, with an enchanting smell and beautiful shiny tiles, welcomed me as a family member—even though I was a stranger to all, and they were all strangers to me. Not for long though! I remember meeting people from all corners of the world, around every corner at I-House.

At I-House, I met those who I consider today my best friends to this day. I still go on vacation with them, I have been to their wedding and welcomed their babies. As a journalist for French Television, I have the opportunity to travel the world. I lived in Paris, London, and Washington DC. There wasn’t a place where I did not know people whom I met at I-House. I-House is a family. A universal one. It could not be summed up by the time I spent there, or the people I met during that time. There is a truly powerful connection that binds all alumni, whatever their age, origins, or destiny.

I remember the Frenchies having breakfast, lunches and dinner all together on one of these long tables, preparing a special show for the Sunday Supper based on a famous French singer from the 60s and 70s. A spectacular show!

here is a funny memory which connects my life today to my time at I-House. One night, my Japanese roommate, Takeshi, answered the phone in our room at around 3:00 a.m. Clearly, he couldn't understand what the other person was saying. I could also guess that the caller was also clueless with Takeshi speaking in broken English. It was my mother calling from France to tell me that a company had been trying to get in touch with me for weeks because they had a job offer for me! If Takeshi had not answered the phone, I wouldn't have been able to pursue the career I have been enjoying for the past 12 years! I-House is definitely about life learning experiences such as love, friendship, and tolerance. A place I will always call home.

Make a Gift to International House

The Fund for I-House