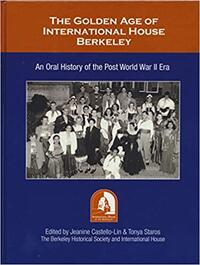 Over the years, interviews with alumni have been captured and documented to preserve the history of our remarkable institution. There are printed transcripts of conversations from alumni featured in The Golden Age of I-House Berkeley: An Oral History of the Post World War II Era, compiled and edited by Jeanine Castello-Lin and Tonya Staros.  View Flipbook

Pictured below are people featured in interviews archived by the Oral History Center of UC Berkeley's Bancroft Library. We are embarking on a new initiative to interview more I-House alumni for oral histories. If you would like to provide an interview or volunteer to help, please contact Margie Ryan (IH 1992-93), I-House alumni engagement manager.

Harry Edmonds was the founder of the International House movement and is largely responsible for the establishment of our own International House in Berkeley. He was inspired to demonstrate to others the importance of a place where both US and foreign students could live together, not just for the sake of housing, but for the broader purpose of fostering a community of cross-cultural tolerance and understanding.

“An International House is a carefully planned and constructed instrument to do a highly specialized piece of work. Under skilled leadership, it takes the migratory student and transforms him into a world citizen, caring no less for his own country but much more for all nations and willing to work for world understanding. With sufficient encouragement, these young people, students today, spreading to all countries and all professions, becoming leaders tomorrow, may conceivably stop the war menace in a generation or two.”

Flora Elizabeth Reynolds had the unique experience of being among the first group of students to live in International House following its opening in 1930. Her interview describes her time as a student at UC Berkeley, as well as her career as a librarian and faculty member at Mills College in Oakland.

“The International House opened, and they were taking 100 women. I was one of the lucky ones...it was of course brand new and very beautiful.”

Emmett J. Rice came to the University of California, Berkeley for his Ph.D. in economics and lived at International House for two years. He also worked in the economics department at Berkeley as both a research and a teaching assistant. He would go on to teach at Cornell and later worked in many positions in the US Treasury Department, including the Federal Reserve Board.

Read the full transcript on the Oral History Center website.

“Those were two enjoyable years at International House. It was very broadening, stimulating, and therefore enjoyable...It was a great experience for me. I enjoyed it very much, looked forward to it. I wished I'd experienced it earlier.”

Jerry Brown is a notable I-House alum who studied classics at UC Berkeley and law at Yale. He is most well known for his life of public service, having begun a career as an elected official in 1969. His interview discusses his upbringing & education, political career, California statewide elected offices, campaigns, and his political views on a variety of current political issues.

Allen Carrier Blaisdell was the first executive director of International House Berkeley. He worked hard to counter the initial resistance to integrated housing from many concerned citizens of Berkeley and the surrounding communities. His perseverance helped foster a vibrant international community at UC Berkeley throughout his 31 years at International House.

“I suppose that if I had not gone to Japan in those days I never would have become the director of International House. It led right into that. I threw off the religious things that concerned me then; it opened the doors of human relations on a world-wide basis. I remember my father once saying to me as I started out on a later European trip, ‘You leave a citizen of the United States, you will return a citizen of the world.’”

Edith S. Coliver was an international activist who truly embodied the ideals of global citizenship. One of her most notable accomplishments was serving as Hermann Goering’s translator for his pretrial testimony during her time working as an interpreter at the Nuremberg trials. Coliver was both an International House alumna and a proud member of the board. Her interview details her life from the impact of Nazism during her childhood to her important work around the world during her later years.

“But the best thing my parents did for me was to suggest that I live in International House, because that was a defining experience for my entire life.”

Marion Ross was an International House resident while working on her Ph.D. in economics at Berkeley during the House’s golden age. Many of her fellow residents were veterans of World War II and she describes how this impacted their shared experiences in her interview, as well as more insight on life within a multicultural group of residents.

Watch a recording of the Oral History Center interview - part one.

“So I met her at this bus stop—it was only a streetcar—and she said to me, well, why was I living in this dopey boardinghouse, when I could be living at International House? I didn’t even know that International House existed. So I was admitted for September, and it’s in many ways, that’s what changed my life, because I met all of these interesting people.”

The Heards were a philanthropic couple living in Berkeley who served for some time on the International House board. They provide a unique account of the happenings at International House from behind the scenes, a variation from many of the alumni experiences that are recounted.

“So we were living in that huge house, and we thought that the least we could do would be to offer hospitality to a foreign student. And then I was going to go to Europe--I didn't go till 1950, but this was in the works.”